As the world is battling global warming, it is inevitable that being at the receiving end, we need to adapt as what mother nature has dictated us to do. There is a need to cope up the rising seas and the environmental higher temperatures we are now experiencing.

Biologists has pointed out of how wildlife changed and handled the effects of global warming. They have cited the rare Adonis blue butterfly of Britain, where it was believed was going to disappear because it couldn’t fly any farther and global warming was making its habitat unbearable.

But to biologists’ surprise, the butterfly has evolved with longer thoraxes and wings as compared to their previous features, and has allowed itself to fly farther to cooler places.

Experts have made a warning that in order for us to survive, we need to follow the butterfly example of how it has accordingly adapted to the changing climate of the environment.

Our existence depends on how decisive and soonest we need to adapt as what wildlife has done. It is a matter of choice, whether to adapt or disappear. If our choice is for the former, we need to accordingly upgrade our infrastructures to cope up the catastrophic effects of climate change.

*** That means we need to elevate the ground floor level of our buildings by adjusting it into a safe and at flood free levels.

*** We need to construct or upgrade our existing dikes, dams, seawalls and other miscellaneous retaining structures with taller and stronger structures to accommodate a much higher seawater and non saline water levels way above than normal.

*** We need to construct adequate water drainage system, clearing and dredging of waterways to accommodate heavy rain run off water in order to prevent flooding.

*** Restricting certain development like deliberate conversion of watersheds, park reservation and forest sanctuaries into different projects other than what is intended.

*** Changing farm practices from use of chemical and turning into organic way of farming.

*** Go for green alternative energy that does not emit carbon gases.

*** Ultimately, moving people, plants and animals to safer grounds, out of nature’s wrath.

One noticeable difficulty as to the effect of climate change, is that it can happened rapidly. “Adaptation will be particularly challenging because the rate of change is escalating and is moving outside the range to which society has adapted in the past when more natural climate changes happened,” declared Jane Lubchenco, a marine biologist and concurrently chief of the US National Oceanic and Atmospheric Administration.

Some countries has started to set aside required funding to adapt the change effected by global warming to name a few:

*** England is upgrading their flood control system for Thames river at a cost of half a billion dollars. 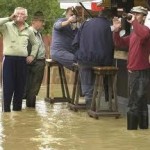