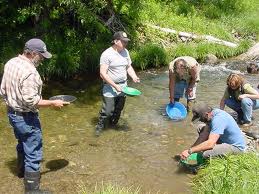 Australia is the world’s second biggest producer of gold after China.

Domestic mines produced 241 metric tons at a value of US$ 12.42 billion dollars in 2010, the consulting firm Surbiton Associates said in its latest survey of the Australian gold mining industry.

One defining feature of the current gold rush, many say, is the age of those joining up, said Dean Eisler, vice president of the Prospector’s Home Prospecting Club in Sydney, which runs package tours to prospect for gold.

As a result, more and more people are giving up lucrative jobs in Australia for a chance at the quick riches and adventure offered by old fashioned prospecting. The influx of out of towners to prospect has been a boon for small business owners in former gold rush towns, many of which have fallen on hard times.

Marco Nero once earned more than US$ 1 million dollars working as a film effects designer for some of the world’s leading digital animation houses. Then he caught gold fever.

He quit his job to hunt for gold. In mid August as concerns about the global economy widened, gold topped US$ 1,800 dollars an ounce after a steady 3 year climb, and gold prices are up 23 percent since the beginning of this year alone.

Brian Dumesny, a 46 year old military contractor from Townsville, Queensland, was persuaded to change professions by the lure of high priced gold.

According to Kim Ellis, who co-owns Nuggets From Down Under, a prospecting shop in Mudgee, in the last six months he has seen probably four people that are quitting their jobs, selling up and going prospecting full time.

For some, prospecting has changed little since the great gold rushes of the 19th century, stick a corrugated pan in a shallow creek, sift and hope. But high technology metal detectors provide an advantage to others.

Gold hunting was once considered a hobby for retirees but now more young Australians are searching for gold, lured by the prospect of quick riches.