Hungary’s worst ecological disaster has officials in Brussels and Budapest pointing fingers over what some claim a flaw in European Union regulations that prevents classification of the “red mud” as a hazardous material.

The recent massive waste spill in October of this year at a Hungarian aluminum plant which left nine people dead has sparked a heated debate about how such toxic material is monitored and whether the regulators are up to the task.

Zoltan Illes, state secretary for the environment, reported six days after the spill that Hungary was pressing for the EU to designate the red mud from bauxite refining as a hazardous material.

However, according to EU spokesman Joe Hennon that the storage of the industrial effluent would have been covered by existing EU directives on hazardous waste and pollution control.

“The Commission will certainly be expecting an investigation from the Hungarian government as to what happened and how it happened,” Hennon said.

Hennon, further stated that if Hungary wants to press for tighter controls in the wake of Ajka ecological disaster, the EU is prepared to listen. “We are open to looking at all European legislation, whether it can be tightened,” Hennon said.

Statements from Hungarian officials, however, relay the impression that the Ajka red mud reservoir may have slipped through Hungary’s own regulatory body.

The Ajka plant had passed an inspection by Hungary’s state watchdog, the National Inspectorate for Environment in the latter part of September, days after the incident happened.

But the director of the state watchdog has stated in an interview six days after the disaster that it was not his office’s responsibility to check the stability of the huge red mud reservoir. “It did not fall within the remit of the environmental inspectorate to ascertain the technical condition of the structure,” it said. 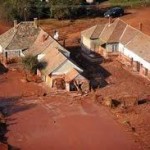 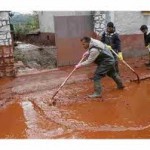