Religion, they say is a way of life. It is something that we practice more often. It is the epitome of our own personal behavior and character. It reflects of what we are, how we project ourselves and how we spend our lives in this world.

Why this is important? Because we need to understand that we are here on purpose. Though there are some people who don’t believe in God, these are the people who believe that their existence is a mere product of chance and never thought of any accountability for their deeds when they die. Respecting their belief tantamount of leaving their fate to God.

However, the vast majority of us, believe that there is God, no doubt, who created us and all everything that exists around us. Because of that belief, each of us, has an affiliated religion of his or her own. It might be our new found religion or a religion that we already inherited from our parents or guardians that raised us since birth.

Whatever it maybe, each of us has the right to know about our religion. Is our religion consonant to what God has mandated us to do?

a) Does our religion teach us to believe and worship in only One God?

Here’s what God has declared to the above question, “Such is God, your Lord, the Creator of all things. There is no God except Him”. Moreover, he said, “And I did not Create the Jinn and Mankind except to worship Me”.

b) Does our religion teach us to worship and pray to Jesus Christ?

God is clear on this issue when He said, “Jesus Christ the son of Mary was no more than an Apostle, many were the Apostles passed away before him. His mother was a woman of truth, they had to eat their daily food, see how God doth make His signs clear to them, yet see in what ways they are alluded away from the truth!”

God further said, “They do blaspheme who say, God is Jesus Christ the son of Mary; ……. . Whoever joins other gods with God, – God will forbid him the paradise and the fire will be his abode……”

c) Does our religion teach us the trinity?

Here’s what God has said to this man made doctrine, “They do blaspheme who say, God is one of three in a trinity, for there is no god except One God, if they desist not to their word of blasphemy, verily a grievous penalty will befall to the blasphemers….”

d) Does our religion teach us that Jesus Christ died on the cross for our sins?

Here’s what God said, “That they (Jews) said in boast , we killed Christ Jesus, the son of Mary, the Apostle of God, but they killed him not, nor crucified him, But it was made it to appear to them. And those who differ, they therein full of doubts, with no certain knowledge but only conjecture to follow. For of a surety, they killed him not”.

To know more of what God has mandated us to do, please read the ‘Speech of God’ to mankind, The Holy Quran. 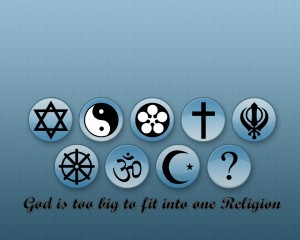