There was a slowdown noted in Arctic warming in 2009, but in the first half of 2010 warming has been near a record pace, with monthly readings over 4 degrees Celsius (7.2 Fahrenheit) above normal in northern Canada according to the report card.

Highlighting the immediate consequences of the warming researchers said last winters massive snowstorms that struck The Northeast and Mid-Atlantic US states were tied to Arctic higher temperatures.

“Normally the cold air is bottled up in the Arctic,” said Jim Overland of the National Oceanic and Atmospheric Administration’s Pacific Marine Environmental Laboratory in Seattle.

But last December and February, winds that normally blow west to east across the Arctic were instead bringing the colder air south to Mid-Atlantic, he said.

“As we lose more sea ice it’s a paradox that warming in the atmosphere can create more of these winter storms.” said Overland.

The new Arctic Report Card “tells a story of widespread, continued and even dramatic effects of a warming Arctic,” said Richter-Menge. “This isn’t just a climatological effect. It impacts the people that live there,” she added.

Atmospheric scientists concerned about global warming focus on the arctic because that is a region where the effects are expected to be felt first, and that has been the case in recent years.

There is a powerful connection between ice cover and air temperatures, Jackie Richter-Menger of the Cold Regions Research and Engineering Laboratory, a US Army Corps of Engineers facility, explained.

When temperatures warm, ice melts. When reflective ice melts it reveals darker surfaces underneath, which absorbs more heat. That, in turn, causes more melting land and the cycle goes,” she said.

In September, the Arctic sea ice extent was the third smallest in the last 30 years, added Don Petrovich of the Army laboratory. He said the three smallest ice covers have occurred in the last four years. Other findings included:

*** Winter snow accumulation on land in the Arctic was the lowest since records began in 1966.

*** Glaciers and ice caps in Arctic Canada are continuing to lose mass at a rate that has been increasing since 1987, reflecting a trend toward warmer summer air temperatures and longer melt seasons.

*** The temperature in the permafrost is rising in Alaska, northwest Canada, Siberia and Northern Europe.

*** Greenland in 2010 is marked by record setting high air temperatures, ice loss through melting, and marine terminating glacier area loss observed in Greenland occurred this summer at Petermann Glacier, where a piece of ice several times larger than Manhattan Island broke away.

The report card, prepared by 69 researchers in eight countries is issued annually by the US National Oceanic and Atmospheric Administration. 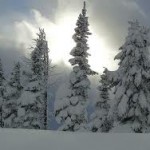