Israel slated a 1-0 victory over Georgia on Tuesday, 29 March, to boost the team’s hopes to be a qualifier for the soccer 2012 European Championship.

Israel rose to third in Group F, level on 10 points with Croatia but trailing on goal difference. Greece leads with 11 points.

“I am very happy with my team. We played a complete and serious game,” Israel coach Luis Fernandez said. “The crowd helped us a lot. The players deserved it because they played seriously and concentrated throughout the game.”

Georgia coach Temuri Ketsbaia was satisfied despite failing to replicate of their 1-0 win over Croatia last Saturday, March 26.

“It wasn’t a bad game,” he said. “In the second half, both teams played more attacking football. We made one mistake and paid the price for it. We tried to get one back but it was after a very tough game against Croatia and it was too much for us.”

Israel continued to press for the remainder of the half while the Georgians, were limited to long-range efforts as the Israeli defense stood firm. 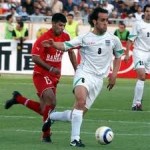