Japan’s whalers will proceed with its annual whale hunt despite resolute opposition and harassment from anti-whaling activists.

Extra ships would escort the whaling vessel fleet to the Antarctic to guard against harassment by anti whaling militants, according to Fisheries Minister Michihiko Kano.

Last year Japan cut short its whaling season because of the harassment.

Australia, which is challenging Japan’s whaling in the international court, has condemned the announcement.

It has remained firm in its opposition to ‘all commercial whaling, including Japan’s so-called scientific whaling.’

There has been a widespread concern in the international community at Japan’s whaling program and majority wanted it to stop, according to Australian Foreign Minister Kevin Rudd.

The group, Sea Shepherd, has pledged to follow the fleet again this year and obstruct its hunt.

In the past there have been collisions between its vessels and the whaling fleet, and its activists have also boarded Japanese vessels.

A ban on commercial whaling for 25 years has been placed, but Japan catches about 1,000 whales each year in what it says is a scientific research program.
Its fleet sails south to the Antarctic in the autumn each year, returning the following spring.

But last year it returned early, citing safety concerns, after confrontations with an anti-whaling activist group that had followed the fleet south.

There had been speculation that the activists’ campaign, budget problems in the wake of the March 11 earthquake and tsunami, and new rules at sea might persuade Tokyo to stop whaling.

But Mr Kano, the fisheries minister, said that this was not the case.

“Japan will conduct the research whaling while strengthening measures against acts of sabotage, including dispatching Fisheries Agency escort ships,” he said. 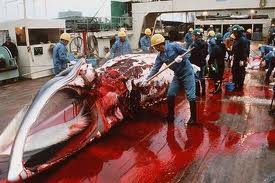