The no-entry zone came into effect following a meeting between Prime Minister Naoto Kan and Fukushima Gov. Yuhei Sato at the prefectural office on Thursday, in which Kan told Sato to upgrade the current evacuation instruction for residents in the area.

Sato, emerging from a 35-minute meeting with Kan, told reporters he had called on the premier to thoroughly explain the new step to the municipalities subject to the legally binding ”caution areas.” 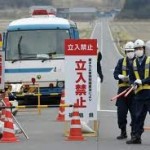