Razuyoshi Sato, a councilman has long opposed the nuclear industry, an unpopular stance in a city where many people were employed at the Daiichi plant, suspected that the farmer Mrs. Kiyoko Okoshi’s fears were founded.

He had seen a map of airborne and soil readings made by the United States Department of Energy and the Japanese government that showed a patch of bright yellow over her village of Shidamyo, an indicator of high levels of the radioactive isotopes cesium 134 and cesium 137.

Local officials kept telling her that their remote village was safe, even though it was less than 32 kilometers from the crippled Fukushima Daiichi nuclear power plant. Okoshi’s simple goal was to buy a US$ 625 dosimeter. She already missed her daughter and grandsons and wanted them to come home.

In April, Mrs. Okoshi began using her dosimeter to check nearby forest roads and rice paddies. Near one sewage ditch, the meter beeped wildly, and the screen read 67 microsieverts per hour, a potentially harmful level. Mrs. Okoshi worked up the courage to confront elected officials.

She has joined the growing number of Japanese who have stepped in, as the government fumbles its reaction to the widespread contamination, which leaders acknowledge is much worse than originally announced.

The dosimeter issue reveals that the Japanese people are getting more nervous rather than less serious about radiation dangers, according to Gerald Curtis, Burgess Professor of Political Science at Columbia University in New York and a longtime Japan expert.

Such activism is exceptional in a country where people generally trust their leaders to watch out for them. That faith has been eroded by a sense that Japanese officials have been, at best, overwhelmed by the enormousness of the disaster, and at worst, hiding how bad things are.

Even some bureaucrats have taken the initiative, official in several towns in Fukushima Prefecture are cleaning the soil in school yards without help from the central government, and a radiation expert with the Health Ministry who quit his job over his bosses’ slow response to the nuclear accident is helping city leaders in Fukushima do their own monitoring.

Mrs. Okushi’s tests has continued to show high levels of radiation, her cousin Chuhei Sakai,also a farmer, went with other villagers to show her data to the mayor. The city has finally decided to start monitoring for radioactive materials in the air.

Many citizens now in Japan are testing their own land for contamination, which leaders now admit is worse than was first announced. 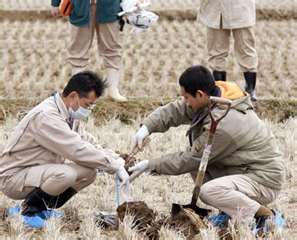