The country singer has ruled out not to undergo any plastic surgery anymore in the future just to enhance his image.

He said the procedure in itself going under the knife is too risky at age 72.

The “Lucille” star has admitted to have his face rid of wrinkles around his eyes that he underwent cosmetic surgery to correct it.

He has no plan in having any work done now he’s got his six year old twins Justin and Jordan to think about.

“At my age now, I would never do that again because I have two young kids and there’s a danger with any surgery.” the country legend said. 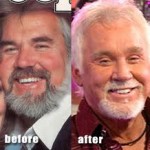