In this year’s Conference on Lasers and Electro Optics (CLEO: 2011), to be held in Baltimore on May 1-6, researchers from Japan will describe the first multibeam laser system small enough to screw into an engine’s cylinder head.

The new laser ignition system is made from ceramics, and could be produced inexpensively in large volumes, according to Takunori Taira of Japan’s National Institutes of Natural Sciences.

Spark plugs can ignite leaner fuel mixtures, but only by increasing spark energy. Unfortunately, these high voltages erode spark plug electrodes so fast, the solution is not economical. By contrast, lasers, which ignite the air-fuel mixture with concentrated optical energy, have no electrodes and are not affected.

Lasers also improve efficiency. Conventional spark plugs sit on top of the cylinder and only ignite the air-fuel mixture close to them. The relatively cold metal of nearby electrodes and cylinder walls absorbs heat from the explosion, quenching the flame front just as it starts to expand.

Lasers, Taira explains, can focus their beams directly into the center of the mixture. Without quenching, the flame front expands more symmetrically and up to three times faster than those produced by spark plugs.

Equally important, he says, lasers inject their energy within nanoseconds, compared with milliseconds for spark plugs. “Timing — quick combustion — is very important. The more precise the timing, the more efficient the combustion and the better the fuel economy,” he says.

Lasers promise less pollution and greater fuel efficiency, but making small, powerful lasers has, until now, proven hard. To ignite combustion, a laser must focus light to approximately 100 gigawatts per square centimeter with short pulses of more than 10 millijoules each.

The laser-ignition system, although highly promising, is not yet being installed into actual automobiles made in a factory. Taira’s team is, however, working with a large spark-plug company and with DENSO Corporation, a member of the Toyota Group.

This work is supported by the Japan Science and Technical Agency (JST). 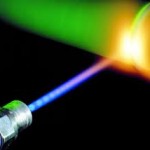 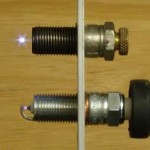