LeBron James is not worried so much about his NBA legacy because he believes that it could take care of itself. James says all he wants to do is win the NBA championship.

He believes that winning is a team work effort and that he doesn’t believe that he has to score points to be effective because he has done other things.

He has great confidence with his Miami Heat team mates, “Not only did Chris Bosh make the game winning shot, but (Dwyane) Wade had a hockey assist,” said James. “I got the assist to Chris Bosh and Udonis Haslem set the screen on (Dallas Maverick’s Dirk Nowitzki) to get him a wide open shot.

James, who had only two of his 17 points in the final quarter, snapped at a reporter who suggested he was failing to live up to his lofty status by not taking control with the clock winding down.

“I think you’re concentrating on one side of the floor. Honestly, I’m a two way player, he said on Sunday during the post-game news conference.

“You should watch the film again and see what I did defensively. I just want to win,” he told reporters.

“My individual stats will take care of itself. In a series I’ve averaged 38 points a game and we’ve lost in the Eastern Conference Finals against Orlando Magic.

“This is a team game. My resume will speak for itself after I’m done with this game of basketball. What me and my team mates are trying to accomplish now is the only thing I’m worried about.

“When I’m done, I’ll let you guys figure where I should be placed.” 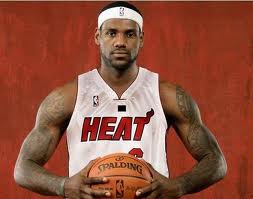