The 24-year-old Russian served 13 double faults on her way to defeat the German to reach the final for the first time since winning the 2004 title.

Eighth seed Petra Kvitova of the Czech Republic won over Victoria Azarenka of Belarus 6-1 3-6 6-2 during their semi-final match at the Wimbledon to reach her first grand slam final.

Kvitova the first left-hander to reach the women’s final since Czech-born American Martina Navratilova in 1994, completed victory on her second match point when Azarenka served a double fault.

Maria Sharapova will be playing against Petra Kvitova at the Wimbledon finals on Thursday. 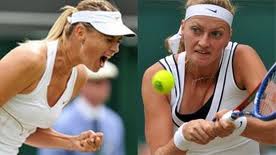