The Bureau of Fisheries and Aquatic Resources (BFAR) established the first marine culture (mariculture) park in 2000 located in the Island Garden of Samal, east of Davao City, which covers 200 hectares.

BFAR started with only two seacages measuring 10 meters by 10 meters. These were stocked with 10,000 to 20,000 bangus (milkfish) fingerlings which were cultured for 120 days.

The result was the fish attained a weight of 500 grams after four months. A 100 square meter cage then, could easily produced 5 to 10 tons of bangus in that short period of time. That’s more than the harvest from a hectare of fishpond under the extensive culture system.

BFAR is aggressively pursuing the project for the sake of providing livelihood to the small scale fishermen but also provide investment opportunities to commercial operators as well.

According to assistant director of BFAR, Gil Adora, the idea is to create protected coastal zones into production areas not only of high value fish species but also seaweeds, oysters, mussels, seahorses and others in coral reefs and sea grass area.

The development of mariculture parks provide opportunities to small scale fishermen and promise to be the answer to the continuing depletion of fish catch in our marine waters that threatens the livelihood of fisherfolks in our coastal communities.

With the establishment of mariculture parks, small scale fishermen benefited from the facility of not going out to sea anymore to catch fish but can now grow fish in cages. The government provides the cages which can be rented by the fishermen and the payment of the rent can be made after harvests of the fish.

According to Adora, sea cage culture of bangus (milkfish) is profitable, after it has deducted the cost of feeds, fingerlings and other incidentals, the net profit from one cage in a culture period of 120 days is Php 80,000 pesos (US $ 1860) to Php 90,000 pesos (US $ 2093) for one cage, although there are those who can operate as much as 10 to 20 fish cages at a time.

The government, aside from providing the facilities, it has brought together investors that could provide the requirements for the total development of the business in marine products. The private sector can invest not only in seacages for fish production but they could also invest in cold storage facilities, ice plant, processing plant, feed supplies, fingerling supplies and other infrastructures.

There are three segments in the mariculture park. The first is for the small scale fisherman who don’t have the money to set up their own cages but the government has provided them their needs. The second are those entrepreneurs who have money to spend but not enough to put up all the infrastructures such as moorings for the cages. The third is where the big investors pay for all costs of the development. 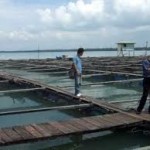