The recent announcement by Bob Arum as he explored the probability of getting a deal with the Mayweather camp just ended again for the nth time in frustration.

Floyd Mayweather Jr. is asking an exorbitant purse of US$ 100 million dollars as his share to fight Manny Pacquiao, which is next to impossible that a fight will ever be bound to happen.

It’s one way of indirectly saying that Mayweather.Jr, himself doesn’t want to fight Pacquiao because he is scared not only to lose but he will end up in a humiliating defeat with the likes of Oscar de la Hoya, Ricky Hatton, Miguel Cotto or Antonio Margarito.

He knows what it takes to fight Pacquiao and he believes that his defensive boxing abilities cannot withstand the ‘no let up’ onslaught aggressiveness of Pacquiao when they’re both in the ring.

His yardstick that keeps lingering in his mind, of what he saw how Pacquiao stop the bruised and battered de la Hoya in the ninth round while in his case it takes him the full distance to beat de la Hoya in a close decision.

He also saw how Pacquiao sent Hatton to dreamland cold by KO in the second round when it takes him to stop Hatton in the 10th round.

He also saw how Pacquiao demolished Cotto and Margarito which are bonafide welterweights whom he evaded to fight in his own division and instead prefer to get entangled with top fighters in the lower weight division of Jr. welterweight and lightweight with the likes of Zab Judah, Ricky Hatton and Juan Marquez

The irony of Mayweather Jr. is that he is considered the best at welterweight and yet he evaded to fight the best contender in his own division. Is he really a true champion or an overhype one?

Sad to say, that Mayweather is an overhype fighter who comes short of the real tests of a real champion that is expected of him because he has always doubts over his own boxing skills and abilities as a fighter. He doesn’t want to engage in a fight if in his mind his chances of winning is slim.

If the opportunity is laid on his face for a fight he believes that he will lose he eventually will do everything over and over again to duck and evade that fighter come what may. 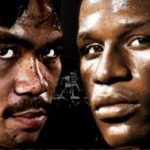