Metallica lead singer James Hetfield hurled stones at reporters who were photographing him in an ice-cream parlor at a chic Uruguayan resort, the El Pais daily reported Thursday.

The singer for the hugely popular American heavy metal band was cruising with his son on a scooter Sunday in Jose Ignacio, located on Uruguay’s southern Atlantic coast east of Montevideo,when photographers spotted him and followed him to the shop, the daily said.

The incident caused only a few dents on the car of a photographer, who lodged a complaint with police, the paper said.

Hetfield has for years spent his holidays in the region with his Argentine wife and his children.

Jose Ignacio is a favorite summer destination for celebrities and jet-setters from around the world.

In 1981, Metallica was organized in California and went on to be one of the biggest heavy metal rock band in history, selling more than 100 million records worldwide including 59 million records in the U.S. alone.

Metallica has become one of the most influential heavy metal bands, and is credited as one of the ‘big four’ of thrash metal, along with Slayer, Anthrax, and Megadeth. 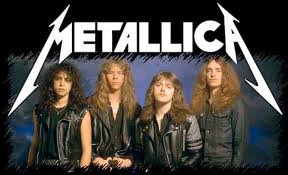