The Mayo Clinic in Minnesota says it plans to monitor nine climbers attempting to scale Mt. Everest to study the effects of high altitude on humans.

They will set up a laboratory at the base of the world’s highest mountain to learn more about the physiology of humans at high altitudes in order to help patients with heart conditions and other ailments.

Dr. Bruce Johnson, who is heading the team said, “We are interested in some of the parallels between high altitude physiology and heart failure physiology.”

Johnson and the eight other team members flew to the airstrip at Lukla, near Everest, on Friday.

The team members plan to study the effects of high altitude on the heart, the lungs, muscle loss and sleep during their stay at Everest, which peaks at 8,850 meters (29,035 feet).

The group will take about a week to trek to the Everest base camp, which is located at 5,300 meters (17,380 feet), where they will set up their lab.

Hundreds of climbers and their guides attempt to climb Everest every year, while thousands more trek up to the base camp.

Several of them suffer from high altitude sickness and other complications because of the low level of oxygen. 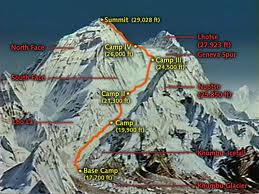