Nonito Donaire Jr. steps up one weight class higher since his last fight with Omar Narvaez that landed him a fight with Wilfredo Vasquez Jr. for the vacant WBO Super Bantamweight Championship.

It was a sweet victory for Donaire of having fought a natural super bantamweight champion with the likes of Wilfredo Vasquez Jr. who was recently dethroned by Jorge Arce in their last fight.

It was Vasquez attempt to regain the title through a contested bout between him and Donaire.

For Donaire it was his first test if he could be able to dominate the division comfortably with the added weight, however, he has shown a tremendous skill and heart to beat the former world champion convincingly.

In the early rounds (1 to 4) Donaire has scored some jabs and power shots dominantly against Vasquez who was contented of tightening his defense and seldom throw some punches.

In the fifth round Vasquez scored his best shot to Donaire when he landed his right hand to Donaire’s face during their exchanges and seemed Vasquez to dominate the round.

In the sixth to eight rounds both fighters unleashing some power shots exchanges but clearly Donaire had the upper hand.

In the ninth round Vasquez was caught by a left hook from Donaire that put him down to the canvass and Vasquez got off his feet smiling to comouflage for the trouble he was in.

In the tenth to twelve (last round) it was all for the Filipino flash who landed more power shots than Vasquez after Donaire has gained so much confidence after his first knockdown against the Puerto Rican puncher.

After twelve rounds, the scores of the two judges were 117-110 in Donaire’s favor while the third judge had his score, a surprising 115-112 for Vasquez, that makes the fight a split decision in favor to the Filipino boxer. 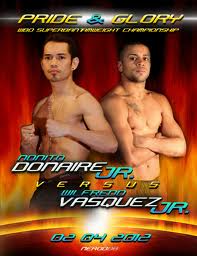