So far only two players have achieved the feat of holding the Australian Open, French Open, Wimbledon and US Open trophies at the same time.

By winning the French Open at Roland Garros’ world no. 1 Novak Djokovic will become the first man in 43 years to monopolize all four Grand Slams titles at the same time, but six-time champion Rafael Nadal has his own history to make of becoming the only man to win seven French Open titles.

Since Laver’s 1969 achievement, only Pete Sampras, Roger Federer and Nadal have had opportunities to complete a non-calendar year Grand Slam.

Djokovic defeated Nadal in the finals of Wimbledon, the US Open and this year’s epic Australian Open to arrive at his date with destiny.

The Serb has yet to make the final in Paris, faltering three times at the penultimate stage, but the 25-year-old knows now is the prime time to strike.

‘I had the best year and a half of my career. I believe that I’m at the peak of my career at this moment,’ Djokovic said.

‘I definitely want to use this confidence that I have and try to make a good result here in Roland Garros. 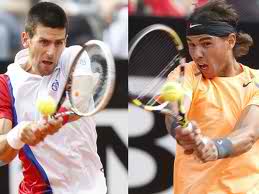