World no. 1 Novak Djokovic defeated Alexandr Dolgopolov of Ukraine 2-6, 6-1, 6-4 as he advanced to the quarterfinals at Monte Carlo Masters.

The Serb was apparently in tears after learning the death of his grandfather Vladimir just hours before playing the Ukrainian.

His grandfather provided refuge for the Djokovic family in his Belgrade apartment during the NATO bombing raids on Serbia in 1999 and Djokovic has spoken of the influence he has had on his career.

The first set slipped away from Djokovic as his ground strokes sprayed long and wide, but he showed resolve at the start of the second set, breaking before clawing his way back from 0-40 adrift to cement his advantage at 3-0.

As Djokovic drew level in the match, Dolgopolov stayed in pursuit of an upset but the Serb is much stronger and consistent in the next two sets and eventually prevailed in the match’s penultimate game.

The 24-year-old did not attend the usual press conference after his win with world tour organizers the ATP explaining that he “just felt totally exhausted physically, mentally and emotionally.”

Meanwhile, world no. 2 Rafael Nadal won in his third round match against Mikhail Kukushkin in just over an hour, winning 6-1, 6-1 and advanced into the quarter-finals.

Nadal, chasing an eighth successive title at the event, enjoyed a far easier day as he lost just 22 points in beating Kazhakstan’s Kukushkin.

“The match started in the perfect way,” said Nadal, who improved his career record in Monte Carlo to 41-1, his only defeat coming against Guillermo Coria in the third round in 2003.

The Spaniard will next face Stanislas Wawrinka of Switzerland for a place in the semi-finals.

Fourth seed Wilfried Tsonga of France edged a first-set tie-break against Fernando Verdasco of Spain, after saving two set points, before racing away in the second to set up a meeting with fellow Frenchman Gilles Simon .

Simon saved nine of the 10 break points he offered Janko Tipsarevic while converting all five of his own opportunities to beat the Serb 6-0, 4-6, 6-1.

Earlier, Andy Murray of Britain advanced to the quarter-finals after his opponent, Julien Benneteau of France, was forced to retire due to ankle injury before the end of the first set. 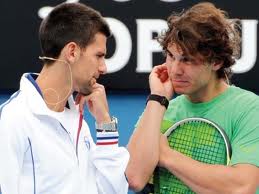