Novak Djokovic is confident that playing on grass is something that he wanted to prove that he can win the title as he returns to compete at Wimbledon.

After Djokovic lost to Roger Federer in the French Open semi-finals, The seed no. 2 opt not to participate at Queen’s to give him ample time to recover physically and mentally.

However, this has deprived Djokovic the opportunity to play on grass at Queen’s which could had been a good warm up prerequisite for him prior to Wimbledon.

Djokovic has never won a grass court title, he manages only to reach the semi-finals twice at Wimbledon. What he’s banking on this time is his best form over the last six months, winning the Australian Open and four Masters titles under his belt with one win short prior to equaling John McEnroe’s record of 42 consecutive wins at the start of the season.

With the momentum of his winning run, he still believes that he is in good shape to end his last two losing streak at Wimbledon.

Djokovic, however, concedes that his baseline style is better suited to hard and clay courts rather than the grass.

Even with his impressive form this year, most experts regard Federer and Rafael Nadal as the Wimbledon favorites which the Serb agrees. 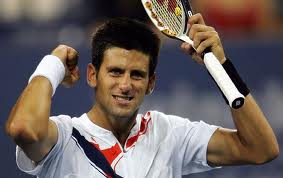