Carl Lewis will not do an athletic run this time but a political one, a Senate seat in the state of New Jersey, where he is going to represent the 8th legislative district now represented by Republican Dawn Addiego.

The nine-time Olympic champion is a former sprinter and long-jumper and has been considered one of the greatest athletes of all time.

He won two golds at each of the next two Olympic Games, and took his final Olympic title – his fourth straight Olympic gold in the long jump – at the Atlanta Games of 1996.

The 49-year-old said he wanted to give back to the southern New Jersey district where he grew up by running for the Senate as a Democrat.

He also said he hoped to bring civility to the currently bitter US political climate.

“The people are fed up with their elected officials playing the blame game and treating their political counterparts as enemies,” he said.

He said he was seeking a Senate seat in order to inspire people and improve educational opportunities, particularly in the area of physical education for children.

It will be the first time Mr Lewis has sought elected office. 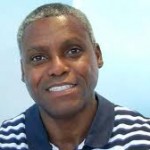