Britain’s Prince William walks with his fiancee Kate Middleton during their visit to Witton Country Park in Darwen, northern England.

A large crowd of well-wishers braved a downpour to cheer Prince William and Kate Middleton as they took part in their final official engagement before their wedding.

The couple were at the academy to officially open the center and also to launch the Skill Force Prince’s Award, which recognize the contribution that young people make to their communities.

They speak with young athletes during their visit and with a student working on a dress in a textile class, during a visit to the Darwen Aldridge Community Academy (DACA), in Darwen, northern England on April 11, 2011. 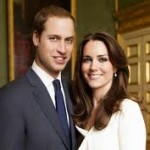