Rocker James Durbin was a favorite to win American Idol at +180, but was given his walking papers by the fans last week. That means anything can happen with only three contestants remaining.

The remaining top 3 to compete next week and their chances of winning the top spot:

*** Scotty McCreery is a big fave to win American Idol now that Durbin is gone. The country crooner entered last week as a -110 fave and now carries a -200 price tag into the final three. But, as we saw last week, anything can happen once the fans have their say. Scotty McCreery -200.

*** Haley Reinhart was a +650 long shot last week, but shocked the nation when she stayed instead of Durbin. Odds makers aren’t taking any chances with this wildcard. While she doesn’t carry the same vocal chops as the other two contestants, she seems to have the voting public wrapped around her finger. Haley Reinhart +350.

*** Lauren Alaina also had her price chopped down from +650 after last week’s show. She headed back home to Georgia this weekend, but did make a stop in Tennessee to see and talk about the tornado and flood damage, which may tug at the voters’ heart strings this week. Lauren Alaina +350. 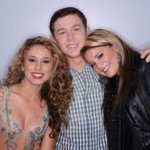