Queen Elizabeth II has written to King Harald of Norway to express her ‘shock and sadness’ at the violent attacks that have left at least 91 people dead.

In her letter, the Queen said: “I am deeply saddened and shocked by the tragic loss of life of so many people on the island of Utoya and in Oslo.

“Prince Philip joins me in extending our heartfelt sympathy to Your Majesty and the people of Norway. Our prayers and thoughts are with everyone who has been affected by the dreadful atrocity.”

The UK’s Foreign and Commonwealth Office in an updated travel advice warned British citizens to take extra care due to high threat from terrorism.

The Royal Norwegian Embassy in Belgrave Square, central London, was open on Saturday and its flag flying at half mast.

According to its spokesman, most Norwegians living in the UK are currently on holiday, and by mid-morning the embassy had mainly been receiving inquiries from Britons concerned about loved ones in Norway.

It is estimated that between 20,000 and 40,000 Norwegians are estimated to be either living or visiting the UK at any given time while about 250,000 British tourists visit Norway every year. 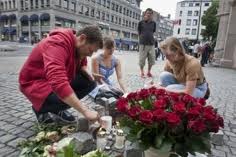