Rafael Cabrera-Bello of Spain carded 68 for an 18-under-par total of 270 to beat Britons Lee Westwood and Stephen Gallacher by a shot to win the Dubai Desert Classic.

“This has been a really, really spectacular week for me and this is the quality jump I was looking for in my game,” Cabrera-Bello said.

The 27-year-old world number 119’s win, on a tough, windy day at the Majlis course of the Emirates Golf Club, was his second title on the European Tour. His previous victory was the 2009 Austrian Open.

“It’s an unbelievable feeling,” said Cabrera-Bello. “This win will open a lot of opportunities to play with the really great players.

Cabrera-Bello was bogey-free while England’s Westwood, who made an eagle two on his second hole, could not make his up-and-down from the fringe on the par-five 18th hole to force a play-off.

And after laying up from the rough, Scot Gallacher, 37, missed his 12-foot birdie attempt to hand victory to Cabrera-Bello – the third Spanish winner of the title in a row after Miguel Angel Jimenez and Alvaro Quiros

Westwood on the other hand, does have the consolation of taking the world number two spot back off McIlroy, by 0.004 ranking points with his performance. 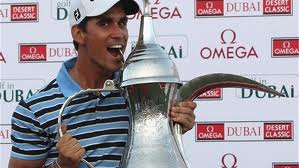