With history on the line for both players, Novak Djokovic and Rafael Nadal will continue their play on Monday after it was suspended because of continuous rain at Roland Garros.

They will resume their play at 12:00 BST on Monday.

World number one Djokovic was in the ascendancy, however, having won eight games in a row to secure the third set and an early break in the fourth.

Nadal, aiming to break a record he shares with Bjorn Borg by winning a seventh title at Roland Garros, looked to be hurtling towards victory as he grabbed a two-set lead and a break advantage in the third set.

But Djokovic, seeking to become the first man since Rod Laver in 1969 to win a fourth straight major, tapped into his seemingly infinite reserves of willpower to drag himself back into contention before the weather disrupted proceedings.

The world number one was unable to penetrate Nadal’s incredible defenses, the frustrated Serb instead smashed his racquet through the Perrier-branded boarding below his courtside seat as his dream began to slip away.

Djokovic had just double-faulted to fall a break down at 3-4 in the second set when he received a code violation.

The 25-year-old Djokovic, who had saved four match points in his quarter-final against Jo-Wilfried Tsonga, won six games on the trot to clinch the third set.

And his winning streak continued as he broke in the opening game of the fourth before play was suspended with Nadal, beaten on the Parisian clay only once since his debut in 2005, rattled. 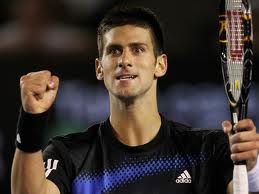