Both Nadal and Federer advance to the quarter-finals. The second seed Spaniard would be confronting seventh seed Tomas Berdych and Federer to face Juan Martin del Potro of Argentina.

“I’m feeling fine,” said Nadal, who had strapping on his right knee and left foot and has now reached the quarter-final stage without dropping a set for the fourth time in five years.

Nadal’s all-round game was too much for 18th seed Lopez, whose passive approach played into his compatriot’s hands.

Federer bidding for his 17th Grand Slam title, the 30 year old was ruthless in his victory over crowd favorite Tomic, 19.

The world no. 3 who has not lost to a teenager since 2006, broke the Australian six times to advance to the quarter-final.

Del Potro is into the last eight of a major for the first time since 2009 and overcame Philipp Kohlschreiber 6-4, 6-2, 6-1 to reach the quarter-finals. 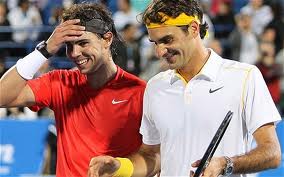