World no. 3 Roger Federer routed Nikolay Davydenko 6-2 6-2 in the opening round of the Qatar Open and will now face Slovenian Grega Zemlja next.

The win of Federer extends his winning record against the Russian to 16-2.

The Swiss defending champion’s victory over Davydenko was in contrast to world no. 2 Rafael Nadal who struggled to pin down Germany’s Philipp Kohlschreiber earlier in the day with 6-3 6-7 (2-7) 6-3 victory.

Nadal, who has been troubled by a sore left shoulder since late last year, had to work hard to beat Kohlschreiber.

The Spaniard took a 4-1 lead against the German in the first set. Kohlschreiber, however, fought back to level in a second-set tie-break, before Nadal twice broke in the third on his way to victory.

Nadal is playing his fifth Qatar Open this year. In 2010 he was the runner-up to Nikolay Davydenko in the championship. 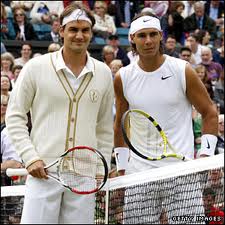