Robin Gibb performs at the London Paladium , his first after his battle with colon and liver cancer.

The 62 year old singer has amazed doctors with his incredible progress in his bout against cancer.

The Bee Gees star joined military trio The Soldiers for the Coming Home charity concert, in support of injured servicemen.

Gibb received a standing ovation as he returned to the stage, his first public appearance for almost five months.

His last appearance was on The Alan Titchmarsh Show which sparked alarm over his bill of health.

Prior to taking the stage, he told fans he felt ‘fantastic’ and thanked them for their support.

The singer in recent months had been forced to pull out of a string of performances and public events due to his ill health.

The prognosis of his condition that it is almost gone and it is well described as a ‘mopping up’ operation.

He revealed he had been diagnosed with colon cancer which spread to the liver, but vowed to beat the disease and continued to write music.

Gibb wore a brown jacket with a black turtleneck and black trousers, as well as his trademark purple-tinted glasses on stage.

He closed the event with Bee Gees classic ‘How Deep Is Your Love’ and ‘I’ve Gotta Get A Message To You,’ which he recorded with The Soldiers last year in support of the Royal British Legion’s Poppy Appeal.

The Bee Gees singer is also due to appear with the Royal Philharmonic Orchestra in April, for the premiere of his first classical composition The Titanic Requiem, to mark the centenary of the disaster. 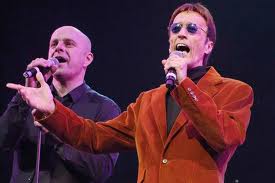