A victory of world no.2 Mcilroy in Sunday’s final would catapult him to world no. 1 position replacing Luke Donald from England.

The 22 year old from Ireland was behind by 3 shots after four holes when he came back brilliantly to beat the world no. 3 Lee Westwood.

Westwood went in front on the par-five second, pitching on to five feet for a birdie while McIlroy missed from 22 feet.

McIlroy found a greenside bunker on the third and then the greenside rough on the drivable fourth and Westwood was three up after four holes.

But Westwood missed a putt from 10 feet to save par on the fifth and McIlroy birdied the sixth to bring the deficit down to one.

Mcilroy, who would be the youngest winner of the championship should he prevail on Sunday, drew level at the par-five eighth with a birdie putt from 14 feet.

Then he birdied the ninth, 12th and 13th and, amazingly, after being three down through four holes, was three up after 13.

Westwood hit back with an eagle on the par-five 15th but McIlroy wrapped it up on the 17th. 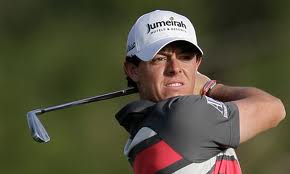