Rory McIlroy and Graeme McDowell representing Ireland in the World Cup carded a 64 in the third round to take a two shot lead to move to 21 under par.

The tandem were joined on 19 under par by the United States as Matt Kuchar and Gary Woodland posted a 63 containing 10 birdies and a bogey while Australia slipped to fifth as a 67 left them 18 under.

Starting the day in the third round, McIlroy and McDowell birdied five of the first seven holes at the southern Chinese island of Hainan to move ahead of the field in the fourball format, where each player hits his own ball round the course and the take the best score of the two.

The Northern Irishmen, who represent the whole of Ireland, added three more birdies on the back nine to maintain their lead.

The chasing pack will be inspired by the situation in 2009, where McIlroy and McDowell led by three shots with 11 holes to play but were defeated by Italian brothers Edoardo and Francesco Molinari on the 18th in Shenzhen, China.

Scotland and Wales are six shots off the pace while England are two shots further back at 13 under.

Rhys Davies and Jamie Donaldson sank five birdies in their opening 10 holes as the Welsh pair carded a seven-under 65 to rise to 15 under.

English duo Ian Poulter and Justin Rose birdied five of the last seven holes in their four-under-par 68 but they are eight shots adrift of Ireland. 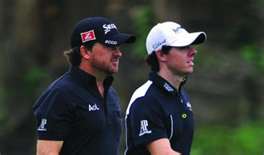