World no. 2, Rory McIlroy kept the ‘Race to Dubai’ money list battle alive by winning the Hong Kong Open on Sunday, but has been struggling with his health for some time.

The 22-year-old US Open champion goes into his European Tour showdown with Luke Donald this week waiting for the results of blood tests.

‘I won’t get the results back until later on this week,’ said the Northern Irishman. ‘I picked up a virus and my white blood cell count was very low, so the tests were to see if it’s back up again.’

McIlroy went to see a doctor on arrival in the United Arab Emirates for the Dubai World Championship.

Asked if he might have pulled out this week if it had not been such a big event – not just for the money list, but also the world rankings and Ryder Cup qualifying points he said: ‘I’m not sure.

The main spotlight, of course, is on the battle between the world’s top two Luke Donald and Rory McIlroy for the European No 1 crown.

McIlroy, the winner in Hong Kong, has to triumph again on Sunday, but even then Donald would still top the money lists on both sides of the Atlantic in the same season, a feat never before achieved,if he finished ninth or better. 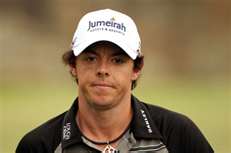