Bacillus thuringiensis (Bt) eggplant or bt talong in Philippine dialect was genetically redesigned to be resistant to the fruit and shoot borer larva that affects crop yielding from 50-70 percent.

It will be approved for release and made available to farmers if it passes through many tests and safety assessments which come in four “bio-safety” stages.

These include the contained research in laboratories, screen houses, small confined trials and multi-location field trials.

The Philippine government has been advised to consider the risks of the field testing of eggplants that have been genetically modified to create its own poison to kill pests that affect crop yielding of eggplants of up to 70 percent in Asian countries.

A lobby group composed of members fro developing countries also said that the Philippine government should reveal the status of the ongoing field testing of genetically modified eggplants as it is stated in the Philippine local government code.

Philippine Agriculture Secretary Proceso Alcala was asked to comment regarding the matter. Earlier, he assured organic farming advocates that the government would not permit the release of genetically modified eggplants if studies they conduct would indicate that it is hazardous for human consumption.

Field trials are currently going on in the southern part of the country after the crops were successfully tested in the northern island of Luzon.

India had rejected the commercial release of the genetically modified organism (GMO) and their Ministry of Environment and Forests issued a moratorium on the commercialization of Bt eggplant.

Dr. Phuspa Mittra Bhargava, a recipient of India’s third highest civilian honorary title said, instead of embracing the genetically engineered crop, it would be a greater advantage if farmers would embrace organic agriculture and integrated pest management as means to eradicate the fruit and shoot borer. 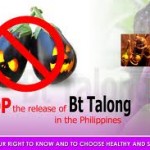