Most of those deaths are concentrated in sub-Saharan Africa, where an estimated 157,000 people die as a result of being exposed to such fires annually, with southeast Asia ranking second with 110,000 deaths.

About twice as many people died during El Niño years when the surface ocean temperature rises in the tropical eastern Pacific Ocean (averaging 532,000) as during cooler La Niña years (averaging 262,000).

“Even in southeast Asia and Africa, (fire) is a seasonal phenomenon. It is not year round,” lead author Fay Johnston of the University of Tasmania said at the American Association for the Advancement of Science annual meeting in Vancouver where she presented her research.

Deaths could be reduced if people stopped burning tropical rainforests in order to harvest palm oil and other products, Johnston concluded.

Researchers looked at the number of deaths from all causes in areas that were exposed to heavy smoke and landscape fire between 1997 and 2006.

They used satellite data and chemical transport models to assess the health impacts of particulate matter smaller than 2.5 micrometers, a major byproduct of landscape fire smoke.

However, the study authors said their findings indicated that “fire emissions are an important contributor to global mortality.”

The research also suggested a significant link between climate change and fire mortality.

The study, which Johnston said was the first of its kind to attempt to estimate a death toll from wildfires and landscape burns, was published Saturday in the journal Environmental Health Perspectives.

In the future fires will only get more severe, according to Mike Flannigan, a professor at the University of Alberta and a government scientist with Natural Resources Canada, who has done research to model how severe fires will be by the years 2081-2090.

Using a variable he called ‘cumulative daily severity rating,’ Flannigan’s projections show that fire activity is “increasing over most of the globe, particularly the northern hemisphere, by a factor of two to three.”

That means ‘significant increases’ in fire activity should be expected by the end of this century as the globe gets warmer, he said. 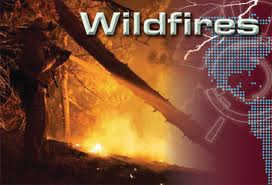