Makapuno nut is very distinct from ordinary coconut where the inside is filled with meat. It is a genetic abnormality occasionally produced by tall coconut varieties. It is highly valued for its soft glutinous meat popularly used as sweetened dessert, ice cream flavoring and as ingredient for candies and pastries.

The traditional makapuno variety is tall and low yield but after almost ten years of painstaking research pioneered by the late Prof. Emerita de Guzman of UP Los Baños in Laguna and breakthroughed by Prof. Tessie Nuñez, a plant breeder and her research assistant Victor de Paz of Regional Coconut Research Center (RCRC) of the Visayas State College of Agriculture (VISCA) in Baybay, Leyte.

It has ultimately produced a variety that bear nuts earlier, yield high and are dwarf and does not need to be isolated anymore to ensure the high yield.

Makapuno coconut yields a high value byproduct called galactomannan which offers many commercial possibilities for the food, pharmaceutical and other industries. This was revealed by Dr. Maria Judith Rodriguez, the principal researcher on makapuno at the Philippine Coconut Authority (PCA), Albay Research Center (ARC) in Albay, as she has made an intensive research on galactomannan.

Galactomannan is a water soluble non starch polysaccharides classified under carbohydrates. It is mainly used in foods as stabilizer. The most common galactomannan sources in the Philippines are guargum and legume based gums which are imported from other countries.

The powder can be used as food additive, thickener, binder, extender, gelling agent, emulsifier and stabilizer in food processing industries.

The powdered galactomannan can be a good dietary fiber which can enhance digestion and weight reduction. It makes a good binder for soft gel capsules as it provides good delivery system creating a slow release effect on the medicine or nutrient compounds.

Galactomannan has the potential as edible or biogradable film that can be applied as wrapper for foods to extend shelf life and preserve nutritional value. It can be used as an alternative to animal based gelatin, hence, providing other option for those who prefer plant derived gelatin.

Galactomannan has been tried as an ingredient in hand sanitizer and a substitute to or combined with agarose or polyacrylamide to lessen the cost of electrophoresis laboratory analysis with positive results.

Makapuno meat can be processed into a good quality virgin coconut oil (VCO) and does not have any nutty smell like that of normal coconut.

The industry now is facing the need to increase makapuno production to meet its commercial requirement of galactomannan. 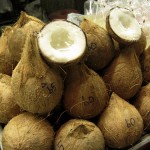