Former world no. 1 Tiger Woods moved into contention at the Memorial tournament after shooting a two-under-par 70 in today’s opening round.

British world number one Luke Donald and second-ranked Northern Ireland Rory McIlroy were also relatively pleased with their scores, though both had to negotiate adversity before carding matching 71s.

Woods, who has won the tournament four times before, shot a double-bogey six on the 18th, his ninth, but that was the only blemish on his scorecard as four birdies saw him back in the clubhouse on two under.

McIlroy one-putted nine greens and chipped in for eagle on the par-5 fifth. A birdie on his last hole gave him a 71.

“It wasn’t the start I wanted to get off to, being 4 over through three holes, especially after the last few weeks,” McIlroy said. “I was just like, ‘Here we go again.’

But I hung in there well, and proud of myself for the way I just fought back. To finish the round under par, I thought was a really good effort.”

Donald, who won at Wentworth to reclaim No. 1 in a back-and-forth battle with McIlroy also was saved by his putter in a scrappy round.

He hit into the water off the tee at the 18th for double bogey, but made three tough pars from the bunkers on the 16th, 17th and first holes. Two of the par putts were from 10 feet, the other from 18 feet.

“Hopefully, that’s my loose round out of the way,” Donald said after a 71.

Woods, who played in the company of fellow Americans Bill Haas and Presidents Cup captain Fred Couples, did not hesitate in reply when asked what had been the key to his round.

“I was just very consistent,” Woods said. ” Over the next three days, hopefully I can play as well as I did today.” 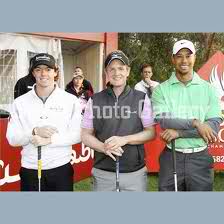