Former world no. 1 Tiger Woods vaulted to the top in the third round sharing the lead with Robert Rock of England At Abu Dhabi Championship.

World no.3 Rory McIlroy is trailing behind by two shots. Woods, who showed glimpses of his old form that has won him 14 major titles, looked set to hold the outright lead on his own though after a tremendous two-putt birdie on the last lifted him to 11 under.

Woods, who is playing this event for the first time, posted his best round since round two of last year’s Masters, where he also shot 66.

Rock, who has a pair of top-15 finishes already this season on the European Tour, is aiming for his second tour title. He won the Italian Open last year.

However, it was Woods, who had a bogey-free round, and Rock, who birdied the final two holes, that broke through the crowded leader board.

Peter Hanson, who shared second at this event in 2007, had the low round of the week as he fired an eight-under 64 to jump into a share of third at minus- nine.

Graeme McDowell (68) and Wales’ Jamie Donaldson (67) both knocked in six birdies to remain in contention on seven under, with 14 players within four shots of the leaders.

World number one Luke Donald birdied three of his first four holes but a bogey on the eighth and a double on the ninth halted his charge and a further dropped shot on the back nine saw him slip back to one over.

Lee Westwood, who has been struggling with a neck injury, produced a bogey-free 68 to move up to four under. 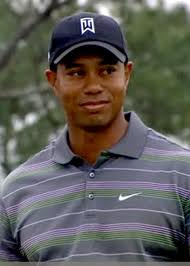