Tiger Woods carded a two under 69 in the final round to clinch the AT&T title at Congressional.

The win moves Woods to second on the all-time list of PGA Tour winners.

It was Woods’ 74th PGA Tour win, moving him clear in second and ahead of Jack Nicklaus.
The only man ahead of him is Sam Snead, who won 82.

The former world number one began the day one shot back of overnight leader Brendon de Jonge, but went two under for an eight-under-par total as the Zimbabwean fell apart.

Van Pelt was level for his final round to finish second on six under, one clear of Australia’s Adam Scott.

The win came at the end of an unusual week, as the tournament was played for the most part in stifling heat and on Saturday, following the storms that battered the mid-Atlantic, no fans were admitted on to the Maryland course for safety reasons.

Last year’s champion Nick Watney was level to finish 10th overall on two under, one ahead of De Jonge and Scotland’s Martin Laird, who leaped up 16 places with a 69 on the final day.

England’s Brian Davis was one of a number of men who had a day to forget – his six-over 77 saw him finish in a share of 49th on eight over. 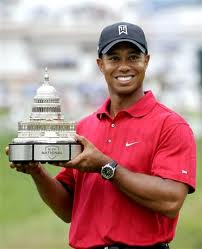