There are three types of tortoises that are often keep as pets. They are the Greek tortoise, the Moorish tortoise and the Marginated tortoise.

According to Hans-Peter Buchert of the German Society for Herpetology all three are mid-sized turtles, the shell of a Greek tortoise can span up to 23 centimeters in length, the Moorish up to 25 centimeters and the Marginated tortoise up to 35 centimeters.

Turtles are a breed of animal from a long lost age. But if you are considering tortoises keeping them as pets, you must be aware that they place great demands on their owner.

Tortoises require an appropriate outdoor cages and shelters for the winter months. Turtles can also grow very old, although a few of them have ever lived longer than their owner.

Julian Helermann from Germany’s Nature and Biodiversity Conservation Union says, the three types of tortoises come from similar habitats in nature. They are usually found in barren and dry areas and partly in mountainous regions.

“A turtle owner needs to take that into account. Turtles must be kept in the open air because they are not suitable for enclosed spaces,” says Buchert.

Turtles are cold blooded animals. “Their body temperature is independent from the temperature of their environment and that explain why they must warm themselves in the sunshine every morning,” says Helermann.

Buchert says the same principle applies to turtles in the home: “A tortoise should only be placed outside when the sun shines.

Tortoise need an outdoor living space that will secure them from attack by other animals. Buchert says that a group of three or four turtles require between 20 and 25 square meters of space.

Turtles are not social creatures but they can live in small groups consisting of one or two males and four or five females. However, it must be possible to separate the males from the females. 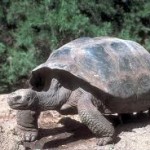