Rhinoceros have been hit hard in recent years. Their horns prized for dagger handles in the Middle East and traditional medicine in east Asia can fetch hundreds of thousands of dollars on the black market.

Several species of these animals have been poached into extinction or to the point of wiping out their existence, according to an update of the Red List of Threatened Species, the gold standard for animal and plant conservation.

A new assessment shows that the western black rhinoceros (Diceros bicornis longipes), a native to western Africa is now extinct, joining a long list of animals from the Tasmanian tiger to the Arabian gazelle that no longer straddle the planet.

Central Africa’s northern white rhinoceros (Ceratotherium simum cottoni) is listed as ‘possibly extinct in the wild’, while the Javan rhino (Rhinoceros sondaicus) is making a last stand after the remaining specimen of its Vietnamese counterpart was killed by poachers last year.

“Human beings are stewards of the earth and we are responsible for protecting the species that share our environment,” Simon Stuart, head of the International Union for the Conservation of Nature (IUCN) Species Survival Commission, said in a statement.

“In the case of both the western black and the northern white rhinos the situation could have had very different results if suggested conservation measures had been implemented.”

There were some few good news showing that species can be prevented from slipping into extinction.

The southern white rhino subspecies (Ceratotherium simum simum) is back from the brink, as its numbers have dwindled to 100 at the end of the 19th century but to some 20,000 today.

“We have the knowledge that conservation works if executed in a timely manner,” said Jane Smart, the Global Species Program director.

A quarter of all mammal species assessed are at risk of extinction, the International Union for the Conservation of Nature (IUCN), which compiles the list, said on Thursday.

About a third of the 61,900 species now catalogued by the IUCN are classified as ‘vulnerable,’ ‘endangered,’ ‘critically endangered,’ or extinct, with some groups, such as amphibians and reptiles, in particularly rapid decline. 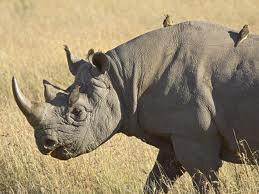