The United States failed to win against Germany and was eliminated from the top tier of the Fed Cup for the first time.

The Americans will no longer be among the top eight nations in the World Group, a big letdown for a country that has won the Fed Cup a record 17 times.

Germany delivered the decisive blow when Andrea Petkovic beat Melanie Oudin 6-2, 6-3 in the first of Sunday’s reverse singles. That gave the Germans an insurmountable 5-0 lead in the best-of-five series and a spot in the elite group of women’s team tennis.

The Americans were Fed Cup runners-up in the last two years, losing both times to Italy. This time, they were clearly hurt by the absence of the Williams sisters.

Venus Williams, who hasn’t represented the U.S. in four years, watched from the stands at Porsche Arena. She has a hip injury and has been sidelined since the Australian Open. But by appearing in Germany, Williams becomes eligible for the 2012 London Games. Players are to make themselves available for the Fed Cup to play in the Olympics.

Serena Williams, who also hasn’t played for the U.S. since 2007, has been out since Wimbledon because of two operations on her foot and a blood clot in her lungs. In addition, the U.S. team lost Bethanie Mattek-Sands, who would have been its top player, to a hip injury. 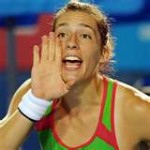