The Boeing Waverider X 51A hypersonic jet of the US Air Force is the latest aircraft technology introduced since the program started in 2004.

The unmanned aircraft was launched from an Air Force B-52 bomber over Point Mugu Naval Air Warfare Center.

The wingless aircraft, designed to travel at six times the speed of sound broke apart over the Pacific Ocean after one of its control fins failed in its latest test.

It marks the second time in a row that the Air Force has been unable to test the technology as planned.

The first test flight, in 2010, flew at five times the speed of sound for three minutes.

The latest test had sought to fly at its maximum speed roughly six times the speed of sound for five minutes.

During the test the experimental aircraft was supposed to maintain its top speed for five minutes.

But the US Air Force said the flight went awry early on when a faulty control fin prevented the vehicle from starting its hi-tech ‘scramjet’ engine.

Charlie Brink of the Air Force Research Laboratory at the Wright Patterson Air Force Base in Ohio, said: “It is unfortunate that a problem with this subsystem caused a termination before we could light the scram-jet engine.

“All our data showed we had created the right conditions for engine ignition and we were very hopeful to meet our test objectives.”

The Pentagon which helped fund the project has been testing hypersonic technologies in an effort to develop faster missiles.

It has also been suggested the research could eventually help build a commercial plane in the future cutting travel time at its minimum.

According to the Pentagon, hypersonic speed, defined as Mach 5 or greater, is crucial for the future of U.S. stealth technology, because the high velocity makes tracking more difficult.

Hypersonic flight also would allow for high-speed missile strikes and deployment of troops.

“This breakthrough decision by the U.S. opens up for it the prospect of a transition from a demonstrator prototype to creation of a multirole hypersonic missile by 2015-2018,” according to Deputy Russian Prime Minister Dmitry Rogozin described American hypersonic technology as a threat to national security. 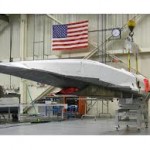