There are about 15 million people in cities across the developing world who survive by collecting rubbish according to the Global Anti-Incinerator Alliance (GAIA), a non government organization.

Among them, is Maya Khodave, 23, a waste picker from India who normally spends her days rummaging through rubbish dumps in a crowded Indian city.

She is also the leader of an Indian waste pickers’ union where she offer herself as part of the solution to tackling global warming. As part of the UN climate change talks which was held in Tianjin,China, she has tried to raise awareness about the value of waste pickers around the world.

“We play an important role in the environment, yet our work is not recognized,” Khodave told reporters.

People such as Khodave can play an important role in combating climate change because they cheaply and efficiently gather materials such as paper, metal and organic waste, then sort them and send them off for recycling.

The UN process under the Kyoto Protocol rewards companies for burning waste and extracting gas from landfill, the waste pickers and recycling have been ignored.

Through the Clean Development Mechanism (CDM), a program of the UN, polluting companies in rich countries can claim “carbon credits”.
CDM has backed 186 waste to energy projects, primarily landfill gas and incinerators, in countries such as India, but so far no recycling projects have been funded, according to the GAIA.

The CDM projects were devastating for waste pickers’ livelihoods because it meant they often got far less access to rubbish.

Private companies would often come in to cities to collect the waste for the incinerators. “These companies are burning waste and making briquettes from it.

What this means is we cannot make compost anymore, we are not able to send the materials for recycling,” said Khodave.

GAIA climate change director, Neil Tangre said that making matters worse, the waste to energy projects were often not nearly as green they claimed to be, the use of incinerators in the burning of waste can emit a third more carbon dioxide than coal fired power plants to produce the same amount of energy. 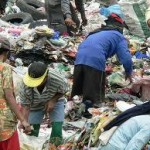