The Yale psychologists found that a sweater owned by a popular celebrity become more valuable to people if they learned it had actually been worn by their idol and not cleaned since.

Their research suggests that physical contact with a celebrity boosts the value of an item so people tend to pay more.

Bidders rationalize their purchases of celebrity items as investments or as items worth having just because they provide pleasant memories and mental associations of someone they admire. But those do not seem to be the chief reasons for buying celebrity memorabilia, according to psychologists at Yale University.

The researchers asked people how much they would like to buy items that had been owned by different celebrities. People’s affection for the celebrity did not predict how much value they assigned to memorabilia, they were not buying it primarily for the pleasant associations.

Nor they are chiefly motivated by profit, as the researchers discovered when they tested people’s eagerness to acquire a celebrity possession that could not be resold. The most important factor seemed to be the degree of ‘celebrity contagion’.

Beliefs about contagion, especially biological contagion, by our ancestors are one of the reasons why we are here today, according to John L. Lastovicka of Arizona State University, and this made a certain evolutionary sense.

Why would someone pay almost a million dollar for a used guitar of Eric Clapton’s Blackie, a Fender Stratocaster in an auction at Bonham in Manhattan? And why a mere replica of said guitar fetch about thirty million dollars?

Scientists have arrived some conclusions to these questions, that the seemingly illogical yearning for an Eric Clapton relic or pseudorelic originates from an instinct crucial to surviving disasters like the Black Death: the belief that certain properties are contagious, either in a good or a bad way.

The Blackie guitar replica’s appeal according to researchers, is related to some form of magical thinking called the law of similarity: things that look alike have similar powers. The guitar collectors interviewed insisted that such replicas had a certain something that enabled them to play better. 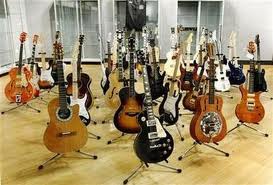