Counterfeiting industry has cost American business an estimated US $200 billion dollars a year.

It is partly coming from factories sitting idle in China where the downturn of legitimate exports during the recession left many factories looking for goods or any goods to produce even counterfeits.

The thrust for counterfeiters nowadays is copying of lesser known brands, which are easy to sell on the internet. It has been pricing the counterfeits close to retail of the original. Any savvy shopper for example, knows a Louis Vuitton bag selling for US $100 dollars cannot be the real thing.

But with lesser brand like Neiman Marcus sells for US $295, and a small website sells them for US $190 dollars, a consumer could think she scored a bargain but the truth is that she hasn’t because the $190 bag is a fake.

The counterfeiters are also lifting photos and text from legitimate websites in their fooling scheme to look and feel like a legitimate company website.
As of now, the authorities have not pursued and have not done anything yet in publishing the branded products that are being counterfeited although they have the statistics to back them up.

The popular boot brand Ugg from Australia made a relentless campaign and develop a full enforcement program to go after on the counterfeiters of their goods and products. In 2009, 60,000 pairs of boots were confiscated by custom agents globally.

Gucci, Louis Vuitton and other luxury brands have been pursuing similar cases. 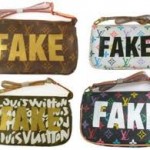