A Danish version of Graceland estate has been built in the town of Randers, Denmark which will be known as Graceland Randers.

The building is almost identical to the original, although it is twice the size to house a shop, restaurant and museum.

This is the Danish tribute to the king of rock ‘n roll, Elvis Presley, where nearly 6,000 Elvis items, from guitars and letters to clothes, will be on display.

Tourism officials in Randers believe as many as 125,000 Elvis fans could make the trip annually and organizers hope to attract at least 50,000 visitors a year.

The building is the brainchild of Henrick Knudsen, an Elvis fan who has run a museum in Randers for the last 16 years, which already attracts 25,000 visitors a year.

The work started on the 26m kroner (US$ 4.8 million dollars) project last summer after years of planning.

Around 150 people have been invited to Friday’s opening ceremony, although organizers are preparing for as many as 2,000 fans to also turn up.

Former rocker and Elvis fan Suzi Quatro will help cut the ribbon.
Doors officially open to the public, with a ticket price of 95 kroner (US$ 17.6 dollars). 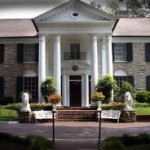