The Blue Ribbon Commission on America’s Nuclear Future, the panel appointed to find alternatives to Nevada’s nuclear waste storage, declared recently that the United States would have to develop a ‘consent based approach’ in choosing site dealing with nuclear waste based on what Finland, France, Spain and Sweden had accomplished, and where U.S. Congress obviously had failed to make the decision.

The aforementioned countries, has decided on their constituents’ willingness and approval to put up nuclear waste depot sites.

By securing local consent the U.S. government might avoid the kind of conflicts that led to the cancellation of plans to create a repository at Yucca Mountain, a site 100 miles from Las Vegas, in 2010.

Congress settled on Yucca Mountain as a disposal site of hazardous nuclear waste materials in 1987 after powerful senators from Louisiana, Texas and Washington fought off proposals for waste storage in their states.

But when Harry Reid of Nevada became Senate majority leader after the 2006 elections, he maneuvered the project to a near-standstill, and Mr. Obama, campaigning in 2008, promised to shelve it if elected.

The Energy Department announced in 2010 that it was withdrawing its application with the Nuclear Regulatory Commission to operate the site.

The panel suggested that the task of managing hazardous nuclear waste radioactive materials should be given to a federally chartered corporation created for that purpose and not to The Department of Energy.

The commission, appointed by President Obama two years ago, warned that finding a safe, permanent solution to the nuclear waste materials issue was urgent. “This generation has a fundamental, ethical obligation to avoid burdening future generations with the entire task of finding a safe, permanent solution for managing hazardous nuclear materials they had no part in creating,” the panel wrote.

Most of those materials are civilian, but some are leftovers of a half-century of nuclear weapons production, beginning in the mid-1940s. A smaller volume is from naval propulsion reactors and government research reactors.

The Fukushima Daiichi nuclear plant disaster in Japan last March 2011, has added urgency to the waste issue, the commissioners wrote, because it underscored the reality that the United States has no option but to store it in spent fuel pools or in dry casks at nuclear plants. They said that work should start promptly on figuring out how to ship the material elsewhere.

Some nuclear power advocates argue that the United States should develop factories and reactors that will recycle some of the spent fuel. But the commission said that no existing technology was adequate for that purpose, given cost considerations and the risk of nuclear proliferation.

Nine states, including California, have banned the construction of new reactors until the waste problem is solved or until substantial progress is made on the issue. 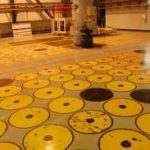