Researchers from the University of Manitoba and of the Children’s Hospital of Eastern Ontario, wrote in the Canadian Medical Association Journal said, ‘Virtually without exception, these studies found that physical punishment like smacking, spank was associated with higher levels of aggression against parents, siblings, peers and spouses.’

A review of 20 years worth of research found that the more often children were slapped, spanked or yelled at when they were naughty the more likely they were to display similar behavior when they grew up.

The authors noted that societies view of physical punishment had changed over the past 20 years and it was no longer considered the best way to deal with unruly children.

The authors of the latest review said spanking children could be counter-productive when they pointed to one study of 500 families that found children were less likely to challenge adults when the parents were trained to stop punishing them physically.

They added that many of the studies found that raising a hand to a child increased their chances of developing mental health problems such as depression.

In the U.S a recent poll found most parents said they used ‘time outs’ or took away favorite toys as punishment. However, a fifth said they were ‘very likely’ to spank their children.

Smacking is currently legal in the U.S with some restrictions which vary from state to state. However, it is banned in 20 European countries, including Germany, Spain and the Netherlands.

In Britain ‘reasonable chastisement’ in the home is allowed however this was not allowed to ‘leave a mark’ on the skin from 2004. A recent poll found 71 per cent of parents would support a smacking ban.

Appropriate approaches include recognizing that toddlers tend to say no to everything and ignoring them for 10 seconds when they act up before redirecting their behavior. Another method is to lay down rules but also explain why they are used.

According to Dr. Joan Durrant, a researcher from the University of Manitoba, ‘They (parents) are more likely to believe that their child is being defiant or intentionally bad, but in most cases, children are simply doing what is normal for their development.’ 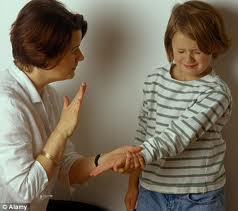