An acid attack is one of the most devastating form of aggression, transforming the victim into a figure of horror and an outcast in a society.

Acid attacks are a rare and extreme form of revenge or punishment found predominantly in Cambodia, Pakistan, Bangladesh and Afghanistan.

In Cambodia, an increase in the number of reported acid attacks with seventeen so far this year, has drawn attention to the country’s only shelter for victims, the non-profit Cambodian Acid Survivor’s Charity, a center on the outskirt of Phnom Penh.

Some of the center’s victims do not survive. Rejected and without family members to care for them, some burn victims take their lives in despair, said Pin Domnang, chief of programs and administration at the center.

“Their identity changes, their whole life changes,” he said. “Their families don’t want to see them,” he added. “The trauma in their spirit is like they are gone. They don’t want to live on this earth anymore.”

Others, spurred by anger, try to pursue their attackers in court. Under current laws acid attack are generally treated as civil assault cases in which the victim must press charges.

Nevertheless, the center’s medical and legal manager, Dr. Horng Lairapo, has been encouraging victims to file new cases and revive old ones.

The center’s residents, who receive medical, psychological care, physical therapy and occupational training, are just a few of the more than 280 known victims in Cambodia of a form of revenge that illustrate an undercurrent of violence that courses through this wounded society.

The center has been advising the government in drafting a law that is making its way slowly through the legislature. It would restrict sales of acid, require warning labels and impose sentences of up to in life in prison for severe attacks.

In a system governed by power, money and influence, there have been few convictions. This is a traumatized culture, said Pin Domnang, referring to decades of mass killing and civil war.

“When something happens, the only response is violence. Violence can make them feel better.” 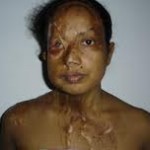